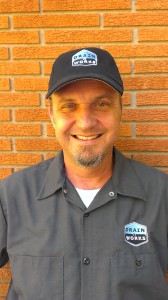 Eric is a second generation plumber and has been involved in plumbing for more than 25 years.

When he was a teenager he worked summers in Mill Valley CA alongside his father (who is now retired) in the family’s plumbing business.  After graduating high school, Eric joined the U.S. Army and served his country as part of the 3rd Infantry Division in Germany and the Air Defense Artillery Division at Fort Bliss, Texas.

After the Army, Eric graduated from San Fransisco State University with a degree in Geography and Regional Studies.  He then gravitated back to plumbing working with his father and older brother back at the family plumbing business.  Eric is very thankful to his father and brother for the wealth of knowledge he gained from working with them.

In 1998 Eric got married and moved to Springfield Missouri and started working with a local plumbing company.  In 2000 he started his own company, Drainworks, Inc., and has established a great reputation as a honest and knowledgeable plumber.

Eric lives in Springfield with his lovely wife and two wonderful boys and is proud to live and work in such a great place.